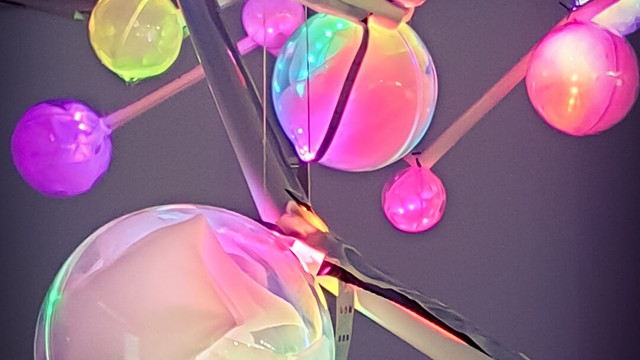 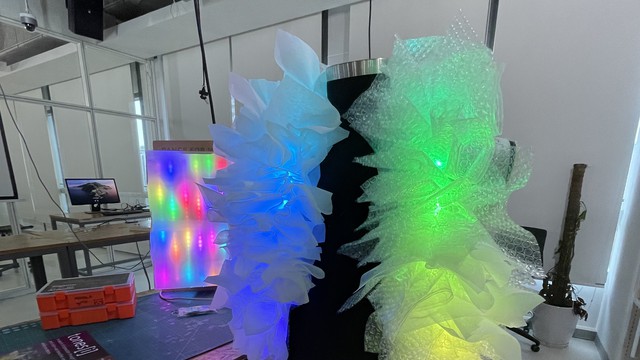 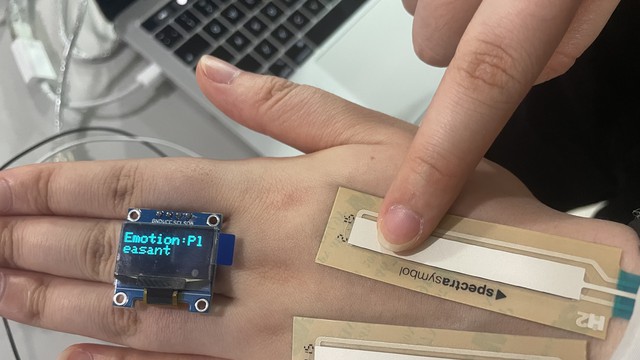 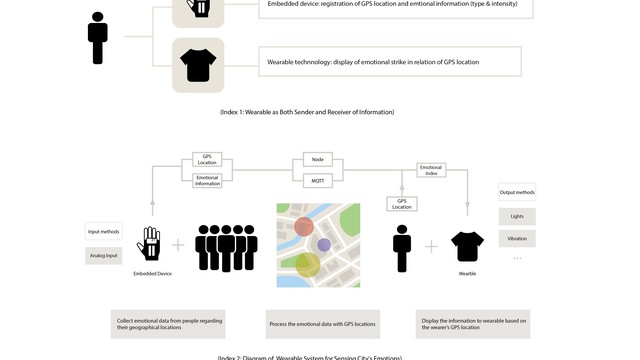 The project presented here intends to demonstrate a case in which the emotional layers of the city become directly sensed and embodied by the augmented citizen through the use of a bespoke computationally-enhanced wearable. The system allows the wearer to input through its interface their current emotional status, assisting in mapping out the city’s psychogeography. By utilizing an embedded series of actuators within the wearable, the aggregated intensity of the city’s emotional form is felt, extending processes of perception, as well as the ways that we understand and link urban space, cloud computing, and humanity.

Modern urbanism is not only notable for its efficiency and human-centered functionality, but also characterized by the diffused information generated by city dwellers. Such features allow a city to be understood beyond its static physical form, and introduce new kinds of urban ambiances rendered by human activities. This project finds its root in the concept of psychogeography and explores the emotional layers that exist within an urban space. Psychogeography has been defined as the study and discussion of how our environment influences our mood and behaviour, and how this is documented in relation to the geographical location. While contemporary psychogeographies put a great deal of emphasis on examining the myriad experiences people have of living in a city, the authors take on the terms further and explore the interactivity between the human inhabitants and their surroundings. Rather than simply recording our experiences and observations of the urban environment, this project speculates on the emergence of a new understanding towards urban space from a meso to a macro/planetary scale. The practice of this project is a synthesis of technology and art. It focuses on the development of an emotive urban experience by utilizing localization, IoT communication, and wearable computing and design. Users’ emotional information regarding their geographical situation will be registered through embedded devices and communicated through GSM networks to associated datasets. The wearable is designed to provoke emotional strikes to the user by means of visual display and tangible stimuli, as the user drifts around certain urban landscapes. In this sense, city dwellers play an active role in the formation of an emotive urban space as both contributors and experiencers. Today’s fast-paced lifestyle has made urban space both physically and ideologically restrictive, discouraging people from the dynamic interactions with their environment. Therefore, authors would like to suggest a case in which citizens regain sensitivity and awareness towards urban spaces through emotion and affect. The role of psychogeography in the age of IoT, cloud computing, and online databases, assists in understanding how urban spaces can be perceived and understood based on collective sentiment. This project is closely related to the topic of “The Aesthetics and Poetics of Responsive Urban Spaces” in a way that it represents people’s responsive emotions of different urban spaces they are in by use of aesthetic visualization of color and physical mechanics.

Technical Concept : The technological features of this project are built around a GPS-enabled micro-controlled device and an online dataset. This GPS-enabled device will automatically track and upload the user's locational information, and with its wireless connection, all the collected data will be communicated through the loT system and be extracted upon the user's change of location. The data will be then reflected on the wearable through lights as well as vibration actuators as output. The input system is designed as a portable device embedded in the wearable with two sensors and a display screen. The sensors allow users to input both the type and intensity of their emotion through the action of sliding to choose what they feel accordingly, and the screen displays related information to instruct the user.

Visual Concept : The creation of the garment of the wearable contains both a contemporary technological feeling as well as a refined artistic aesthetic. The input interface that is placed on the hand is designed as a cyber-glove with minimalist style so as to create a cyberpunk feeling, while the upper body is covered by the garment and embedded with led light strips and vibration actuators. Such design seeks to maintain a balance by mitigating the technological feature through soft fabrics, which offers a futuristic yet poetic representation of a general dynamic impressions people have towards an urban space.