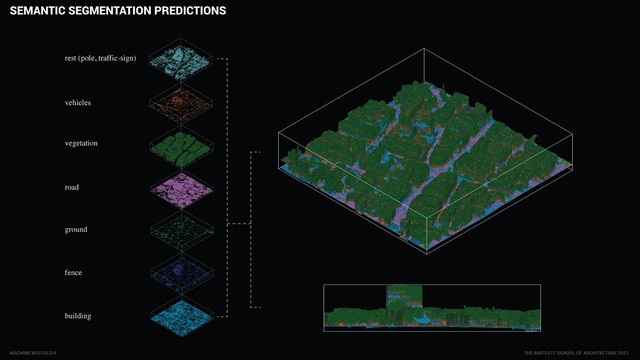 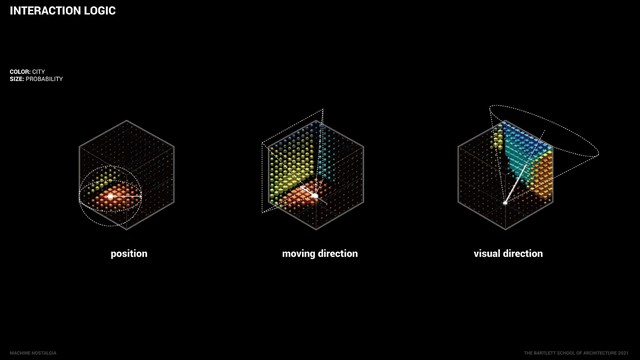 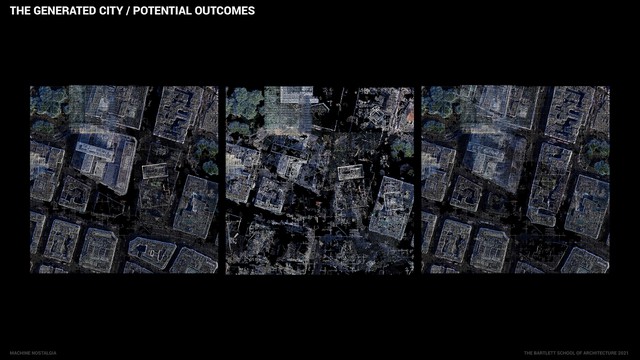 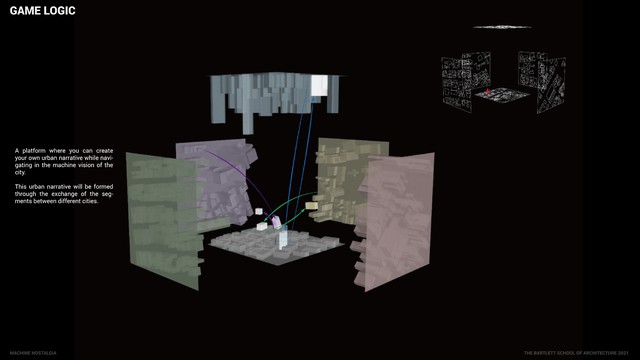 Machine Nostalgia explores a way to incorporate the emerging paradigm of machine errors into a playful and interactive experience. It combines the reduction of urban information into signals (x, y, z, R, G, B) with the exposure of dataset bias occurred from medium specific 3D scans. It wraps up with a game platform that allows you to create your own urban narrative by wandering in a city that rebuilds itself into a city of multiple cities and multiple identities. Your vision, position and movement is affecting the environment, while they are curated by the machine perception. There is no direct objective, other than the rearrangement of interrelations between urban elements.

The overall experience aims to provoke imagination and create speculative scenarios, where topology and locality are redefined. Using the player’s intuition of walking in an urban environment, the platform extracts and analyses the movement and then responds to it. This response consists of urban segments moving and exchanging in a vast and undefined environment. Contrary to other views of the city’s identity as collective, this process generates an identity from the strictly dual relation of human - machine. It highlights that machine learning algorithms are performing pattern recognition and by default are biased. In this case, the urban 3D point clouds were segmented and labeled wrongly or, as it is usually argued, far from the ground truth. This characteristic is not directly noticeable in the interactive experience, but it is the driving force of the whole system: the extraction, classification and organisation of data. The initial selection of the cities emerged from six critical urban zones in the six continents, in order to create the hyper-culture city. The complicated urban metabolism is transcribed as a frozen moment in time, a continuous surface which includes all momentary flows and static objects. It is therefore calculable and has values as computational geometry, like position and colour. During the game, the city is changing its morphology in real time, resulting to mapping of personal psycho-geographies. It is becoming a planetary hybrid revealing the emerging techno-society and rendering some of its intangible flows. This project overall celebrates experimentation as an inherent part of architectural processes. This experimentation relies mostly on software and tools, using the ones created to prioritise efficiency in a serendipitous way. It mediates the image of the city as monumental and redefines it as the centre of the flux - a hyper connected entity with connections that are continuously updated.

Technical concept : The process started by experimenting with urban replication techniques and extracting 3D models of city parts from Google Earth with blender and MeshLab software. Running a pre-trained machine learning model for semantic segmentation, the team noticed that their 3D models differ from the training dataset, as they are not sequential point clouds from a LiDAR scanner. This medium bias affected the overall outcome, where roofs were labeled as vegetation and building parts as fences. Six libraries of six cities were created, labeled and numbered. Every segment from these libraries was compared to every other segment from other cities under the same label and then matched with the optimal fit based on their colour and size. Tools used: Open3D-ML library python, Meshlab, CloudCompare, Unity, PCX package in Unity

Visual concept : The environment in which the player is navigating is constructed of point clouds, therefore nothing is solid and everything can be permeable. Additionally, as the player starts navigating in the first city, London, the segments will start moving and exchanging. The player is the trigger of this movement and the whole process is a way of communication with the machine.